For some reason, my husband periodically feels the need to invite me to help him with his favourite hobby; obsessively caring for his car. My usual reaction is a strict negative, and I take advantage of the time to do something I enjoy. This time, however, in my endless pursuit of knowledge, I decided to participate- suitably bolstered by cannabis. 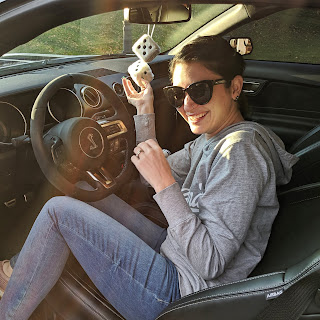 Strain: Sour Gelato (Hybrid)
Activity: Car Care
Hypothesis: As with many tedious chores, car care should be made a more tolerable pastime to engage in after smoking a blunt.

In the hectic toing-and-froing of life, particularly at this time of year, husband and I have had to really make an effort to do things together, rather than just trading off responsibilities. Each of us will take turns doing things we don't particularly enjoy in order to pursue a conversation begun hours before.

With my daughter at a friend's house for the afternoon, my husband had decided to begin the process of winterizing his 2017 Mustang Shelby. Knowing what a drawn-out process this would undoubtedly be, I grumbled at his choice of chore before ultimately deciding that this may just have the potential to be a great activity to try stoned. 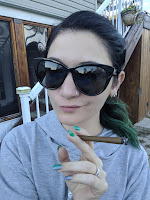 As Mary Poppins says "For every job that must be done, there is an element of fun...find that fun, and snap! that job's a game!" So I decided that cannabis would be just the teaspoon of sugar to make an afternoon of car care bearable.

For this activity, I briefly considered asking my husband's opinion on my choice of strain; but given our vastly different reactions to pot, I rejected that thought pretty quickly. The Sour Gelato I eventually chose would have sent him for a tailspin, whereas I felt the well-balanced effects of relaxation and euphoria expected from this even-tempered hybrid. I find that the different characteristic effects of this strain really reveal themselves in a unique way from person to person, but usually hit pretty center on the 'high/stoned' continuum. Potency is certainly there in spades; despite this, I rolled myself an entire solo blunt.

I lit up as my husband "got the car ready" for me to clean. Although I am admittedly the farthest thing from a 'car person' there is, it was difficult not to take umbrage at the extraordinary lengths this man went to to make sure I couldn't damage his prized possession.


We began by spraying on some sort of coating, then rubbing it in; I was assigned the passenger-side door. Within moments, as I was crouched next to the car, I began to feel uneasy. Hyper-vigilance is my ever-present companion, but it rarely becomes evident at home...unless, say, someone were staring at me intently.

My husband couldn't help himself. He began offering small suggestions, finally asking for my cloth to properly demonstrate the technique to avoid leaving streaks. 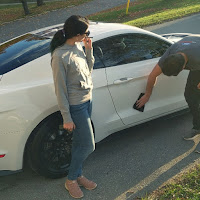 Already bored of this activity, I was more than happy to let him take over.

As was slowly becoming apparent, no amount of sugar was going to make this task more palatable for me. The Sour Gelato had, however, provoked a fit of giggles that only intensified the more anal my husband became over the car's treatment. He was so endearingly earnest in his attempts to teach me something, anything, about how to care for a vehicle, that he suddenly reminded me of my father, who made the initial futile attempts to impart car knowledge onto me; followed several years later by my uncle Leo's equally doomed lessons. I just can't seem to summon any enthusiasm to learn about cars. Even with the questionable assistance of cannabis.

The final straw for my husband was when he popped the hood, undoubtedly disappointed to not hear me gasp in awe and delight at the reveal of the car's insides. No, my reaction differed somewhat:


As he closed the hood and completed my half-finished jobs, slumped in dejection at my unrestrained mirth and blatant lack of interest, I realized that although the activity left me nonplussed, there were some parts that I enjoyed.

Spending quality time with my husband, seeing him in his element, and taking a learning role to his teaching one served to change my perspective just a bit. Car maintenance is something that I loathe; so isn't it a wonderful coincidence that my partner takes such pride in caring for ours? I was reminded, in all this, that our differences are vital; I mean, if we were all car people, then who would grow the pot?

The Verdict: Cannabis did not prove effective in enhancing my enjoyment of car care tasks. I became concerned that I wasn't doing it right; but more than anything, I became bored. I do not believe a different strain would have helped; however, this giggly hybrid did give me some fun times injected into the tedium.

Posted by The Lettuce Lady at 5:30 AM