I have a love-hate relationship with grocery shopping. I love food; but the huge open space of the store (and the fluorescent lighting), triggers episodes that impair my ability to shop. Enter, cannabis. They say that you should never do groceries hungry, or you risk buying more than you need; but what about doing groceries high? 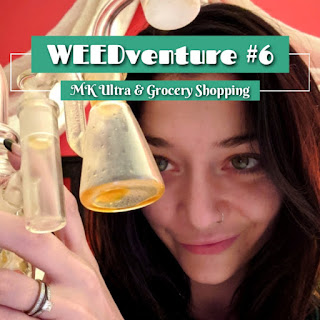 Strain: MK Ultra
Activity: Grocery Shopping
Hypothesis: Given that the grocery store environment amplifies my episodes, and cannabis helps to soothe them, consuming cannabis before going grocery shopping should help cancel that out. I have some concern that I may over-buy due to increased appetite- but that's a risk I'm willing to take.

I come from a large French family of cooks and chefs; for us, eating is not just sustenance. Our whole interaction is formulated around what meals we will make together; usually very elaborate, multi-phased affairs, always from scratch. As such, grocery shopping is not just a 'trip to the store'; it is Step One to creating memories and laughter. It would not be uncommon to spot my whole family going from market, to store, to roadside stand looking for the exact right ingredient.

I, however, have come to realize that the fluorescent lights, the low hums, and the echoing spaces of your average grocery store overwhelm me and cause me to dissociate. Any more than 15 minutes in one and I experience nausea, blurred vision, confusion, and fear.

Usually, cannabis is not an option for this particular activity since I must drive the short distance to and from the store; but this time, my husband was available to act as chauffeur. I had the time to contemplate my strain selection well, though I found myself torn. It was 8:30am, which would be the right time for a sativa; however I knew that if I was going to do a successful shop, I needed to use the strain that protects me best- i.e., an indica.


I hummed and hawed for a while before finally deciding to dab some MK Ultra; a peppery, earthy-tasting indica that hits you like a hammer wrapped in lemon rind. While most use this strain for sleep, I have found that dabbing it will give me more energetic effects than if I were smoking is as flower- making it suitable for more than the couch.

I did a couple smaller dabs of the MK Ultra, and we set out to the grocery store. I was feeling the usual mix of relaxed euphoria juxtaposed my hypervigilance as we arrived, and unwittingly forgot the shopping bags in the car (as you do). While my husband ran back to get them, I strolled into the store, and began to shop for the makings for my daughter's birthday dinner. 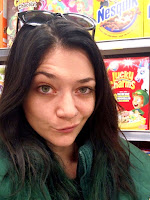 Maybe it was the earliness of the hour that accounted for fewer people, but I did not feel the usual aggravation and uneasiness that comes with being herded with other humans inside a building. I blithely collected a cart and began with the produce (we're making homemade pizza). I got through deli and dairy before my husband rejoined me. He asked me how I was doing, and I assured him I was fine- clear-headed with a sunny outlook.

Then, however, we passed coffee and proceeded to cereal.  Suddenly, a wave of giddiness had me laughing and placing not one, but two boxes of junk cereal into the cart. This is what I had feared in getting stoned before grocery shopping: the irresistible lure of junk food. Trix and Oreo cereals in my cart, I moved to the next aisle, the freezer aisle; and that is when the munchies really hit.

I was literally salivating as we walked past the chips- they are my weakness. Those, and the pogos, pizza pops, poutine bites... I nearly wept as my husband, never the voice of reason, swept us right on by to pick up one final item. Once he'd successfully located the boring old cornmeal, he dragged me mercilessly through the discount Hallowe'en candy to the checkout. The environment of the grocery store may not have triggered me as yet, but the annoyance I felt at the countless goodies we bypassed was very real.

We'd been in the store for about 30 minutes collecting the various items we needed. In that time, I'd not had any episodes; however I did emerge with some junk cereal and a few choice comments about my husband's first ever display of restraint.

The Verdict: Cannabis did indeed provide the relief I needed to avoid any episodes at the grocery store; however, I did find myself leaving with my usual harassed demeanor- this time, because I was not able to indulge in the snack foods I suddenly craved. I also left with Trix - who even eats that!?!?

Recommendation: I recommend cannabis before grocery shopping only if you have a chaperone!