Personal Choices, and Things that are not at all Choices

In November 2019, I was thrilled to find out that my husband and I were expecting a baby! As soon as this news sunk in, I knew I was about to go through the wringer of indecision that accompanies a woman's journey through pregnancy. I remember it well from when I was pregnant with my daughter nearly 7 years ago! Societal pressures, medical advancements, old-timey wisdom, unsolicited opinions- all will inevitably factor in to my personal life for the next 9 months, whether I like it or not. 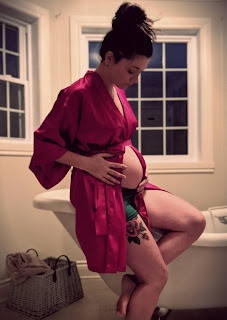 This time, however, I have the benefit of hindsight, and the gift of experience to draw from; not to mention a vivid memory of the harrowing trajectory my life took in the intervening years since my daughter was born in 2013, due in no small part to my unwillingness to advocate for myself with members of the medical community. Let's step back for a moment and examine this, shall we?

Unbeknownst to me, I suffered from untreated Post-Partum Depression. I also began my struggle with OCD at this time; essentially, I was bereft of feeling, and compensated by trying to be absolutely perfect at everything to do with my baby. In my mind, no one could care for her but me (including her father, to a certain extent). The stress was unbearable, but the oft repeated refrain of 'this is normal' and 'you'll get through it for your baby' convinced me I was just weak and dramatic. Then came my return to work.

I championed on, juggling my worsening OCD, my isolation, and the substantial pressures of proving myself not to be 'mom-brained' at my job. In my precarious state, I then encountered a triggering event that caused a tidal wave resurgence of PTSD from long-ago trauma. I began dissociating, losing huge gaps of time to memory loss ('dissociative seizures'); I shook constantly, became hyper-vigilant, experienced panic attacks, migraines, and a choking sensation that never fully eased; until finally, I went to the hospital directly from work, convinced I was dying. There, I was thoroughly misdiagnosed as bipolar, and medicated so inappropriately so as to border on malpractice. For 3 years.

Unsurprisingly, none of the medications worked. During my 3rd hospitalization in early 2017, a new doctor began a supervised detox and extensive testing that revealed what my previous doctor wouldn't admit in her hubris- that I was not bipolar, but suffered instead from long-standing, stubborn PTSD. Cannabis became my weapon of choice to fight these demons.

That spring/summer, I met new people who bolstered me and became very good friends; as a 'canna-mom' I loved every second with my daughter. Being a mom took on a new light- no longer a stressor, but rather a stress relief. Cannabis, combined with weekly therapy, accounted for significant improvement in my quality of life, and continues to do so.

So, when I became pregnant again I had some decisions to make. THC & CBD, as readily acknowledged by all my doctors, are the only things that have helped me regulate both physical symptoms and emotional distress. As we all know, however, recreational cannabis use during pregnancy is contraindicated, with no comment on medical use.

Naturally, I immediately stopped medicating. I also stopped sleeping because of nightmares, stopped eating due to lack of appetite (I was already 10lbs underweight at this point), and began to dissociate again with alarming frequency (not to mention the intrusive thoughts that came, too). My husband, my parents, asked me to reconsider making these changes to my cannabis medication regimen. Things were falling apart, and I felt I had nowhere to turn.

Enter my midwife, who listened and calmly suggested some practical changes to my regimen that would be healthier, but still allow me to medicate and be well. After all, I am not just a vessel for a fetus, but also a human being. She emphasized that the level of stress and fear that I carried was definitively proven to have adverse effects on a pregnancy.

I resumed medicating, with some changes; I stopped smoking joints and bongs, and I stopped consuming edibles; now relying solely on my vaporizer. I also now steer clear of concentrates, as the dosing is too high (and higher than I need, really).

The risk of the unknown still weighs heavily on me, as it does on any woman who must continue a medication regimen through their pregnancy; be it antidepressants, anti-convulsants, or other. However, the support of my husband and family (those who know me best) comforts me that I am not alone, making a unilateral and potentially selfish decision. Not to mention that all my doctors are watching and supporting me and my baby- who is, I am thrilled to say, big and healthy, tumbling about happily in my ever-expanding tummy.

Posted by The Lettuce Lady at 6:44 AM